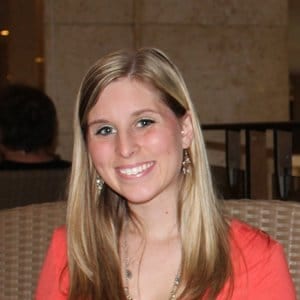 Her mother’s side of her family hails from Canada, so Jessica Lennon ’13 grew up hearing a lot of French.“French has been part of my life for my whole life,” says Jessica, who started her college career as a psychology major, but had an epiphany halfway through and switched her major to French.The epiphany happened after Lennon spent a semester studying abroad in Austria, where she had the chance to visit France for the first time and to use the language she grew up with in the country of its origin.

By the time she switched majors, Lennon had already accumulated enough credits to minor in psychology, which, she says, is a great fit for her future as a teacher.

“If I’m going to be teaching students, I think it’s really useful to have that knowledge of how they work,” she says.

After graduating, Lennon wanted to immerse herself fully in the language she loves, so she spent four months living with her cousin’s family in Quebec, speaking almost entirely in French while she was there—an experience she fondly calls both “crazy” and “amazing.”

Now back home again, Jessica plans to begin classes soon at Plymouth State University in her home state of New Hampshire, a school that offers a unique program with a concentration on teaching French. Meanwhile, she has been gaining teaching experience through substituting in high schools.

“Subbing has been a great experience, because it has shown me that I love teaching,” she says. “I just can’t wait to have my own class.”