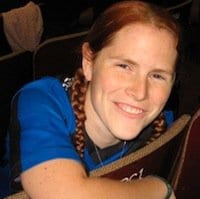 She transferred a second time, and found herself at home, both academically and spiritually. Her senior year, Jamie attended RCIA and was baptized.

With her background in fine arts, and through the influence of Professor Dale Prey, Jamie focused on technical theatre: She worked in and eventually ran the scene shop for Anathan Theatre, and after graduating in 2009 went on to receive her MFA in theatre design and production from the University of Cincinnati’s College-Conservatory of Music. She was the program’s first graduate with a focus in scenic properties (props).

Professionally, Jamie has worked for the Utah Shakespeare Festival as senior properties artisan, and will spend this summer as the properties manager at the Berkshire Theatre Festival in Berkshire County, Massachusetts. She is also active in the Rebel Legion, an international charity that raises money for programs such as the Make-A-Wish Foundation and visits children’s hospitals. Each member of the Rebel Legion is required to own a movie-quality Star Wars costume: Jamie recently completed building her own 7 foot tall Chewbacca costume.

“Franciscan gave me the solid foundation of skills upon which I was able to build during grad school,” Jamie Arielle says. “Take advantage of everything offered: Even if you want to act or direct, pay close attention in design and stagecraft classes because knowing the backstage skills will give you an advantage in the real world.”