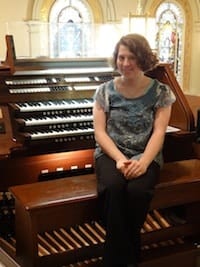 Pope Emeritus Benedict XVI says sacred music is “an audible and perceptible rendering of the truth of our faith. In listening to sacred music — suddenly we feel: it is true!”Emily Meixner ’12 experienced this revelation as a freshman at Franciscan University of Steubenville, when she recognized her passion for music and decided to pursue a degree in sacred music rather than English.“I have never regretted that decision,” she says.

After Franciscan, Emily received her master of music degree in organ performance from the Cleveland Institute of Music after two years of study with internationally renowned concert organist, Todd Wilson. She plans to continue her studies in organ and sacred music in the doctor of Musical Arts Program at the University of Notre Dame.

Emily reflects on her undergraduate career in Franciscan’s Sacred Music Program as “a time of immense blessing, inspiration, and thorough immersion into the musical traditions of the Catholic Church.”

“This program is forming musicians for the conversion of souls,” she says.

Emily says that her time as a member of household helped further integrate her vocation as a musician with her faith life.

“Through my household, I have realized my calling as a musician to convert souls through the preaching of the beautiful — that is, through music, particularly in the liturgy.”

She adds that the availability of the sacraments on campus prepared her for working toward the conversion of souls by providing her with a foundation of faith.

“Going out into the world to preach the Gospel isn’t about just telling the world what the Church teaches on issues like abortion and same-sex marriage. My experiences over the past few years have led me to believe that evangelization is possible only after you have established a relationship of mutual respect and honesty,” she says.

After graduate school, Emily hopes to continue her career as a performer while also serving as an organist or music director at a Catholic parish.

“My dream job would be to work for or to found a Catholic choir school where children are educated not only in traditional subjects like math, social studies, and science, but also receive rigorous training in sacred music and choral singing,” she says.