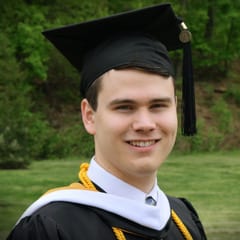 As a content curator for Fox, Dan distributes Fox News and Fox Business primetime programming to their digital platforms. His daily tasks employ various video, photo, and editorial skills, and he is constantly engaging in new creative challenges.

“I get to be hands-on with my passion; editing videos and photos, detailing the news, and more,” Fillimon says.

At Franciscan, Dan developed his passion for communications by working with diverse media beyond the normal course load. From working as a TV lab supervisor and a crew member on the EWTN program Franciscan University Presents, which is taped at Franciscan University, to getting behind the mic on the Franciscan Effect radio station, Dan honed his skills as he strove to share quality content with an audience.

Dan says, “The communication arts faculty at Franciscan understand that constant change is the nature of this profession, so they ensure that students are ready to tackle the unfamiliar.”

He explains that the challenges you face in the classroom form a firm foundation, while a surplus of extracurricular opportunities on campus provide the grit needed for a career in a competitive field.

He credits Franciscan’s Career Services office with helping him select his major and minor courses of study and apply for internships; citing the mock interview as being especially helpful.

Fillimon’s spiritual formation at Franciscan took place on a private level. He formed a connection with Christ both in eucharistic adoration and the Mass, finding peace in silent conversation, and joy in a crowded church.

“Humankind is made in the image and likeness of God; therefore, we inherently seek to create. At Franciscan, I could explore the digital arts to their fullest in Christ!”