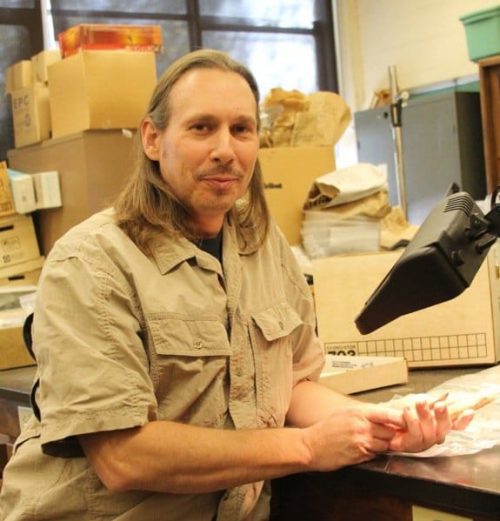 John Boilegh remembers walking into Franciscan University in 1995 thinking he had three strikes against him: He was a local from the “rough steel town” of Steubenville, a non-traditional student at 25, and a commuter. Add to that his long hair, black leather motorcycle jacket, and interest in anthropology, what he called “a godless science at a Catholic university.” He’d been warned about the strong religious atmosphere on campus so as a non-Catholic, John expected he would not fit in. To his surprise he recalls, “I found just the opposite! I was really impressed with the ‘true Catholics.’ Everybody was really friendly, kind, and not judgmental.”John had a degree in natural resource management from another college when he took on an archaeology job with Professor Phil Fitzgibbons to excavate a local site. That’s when he decided to earn a degree in anthropology at Franciscan with an emphasis in archaeology—a decision that’s led to a successful career. “I emphatically recommend the Franciscan courses and professors! I still consult with Professor Fitzgibbons and hire their students,” says John.

He’s impressed by the department’s field schools and smaller class sizes creating an intimate learning environment. “If you have questions, you can approach professors, and they take time with you. It’s a huge advantage over bigger schools. Here, you can really dive into more interesting aspects from the minute you arrive.”

There are “many weird and strange jobs out there” in anthropology, John says. He’s worked for resource management and consulting firms on archeological surveys required before construction projects in order to find and protect prehistoric finds. Currently employed by the Ohio Department of Natural Resources, John works with coal companies to make sure new mines meet state requirements for protecting cultural and archaeological sites. He’s also a popular and entertaining public speaker giving educational presentations on archaeology.

Asked about his career, John says, “I love it! I go to work in the mountains of West Virginia and Kentucky, and say ‘I can’t believe I get paid to do this!’ I am using what I learned after investing time in college and enjoying it, too!”