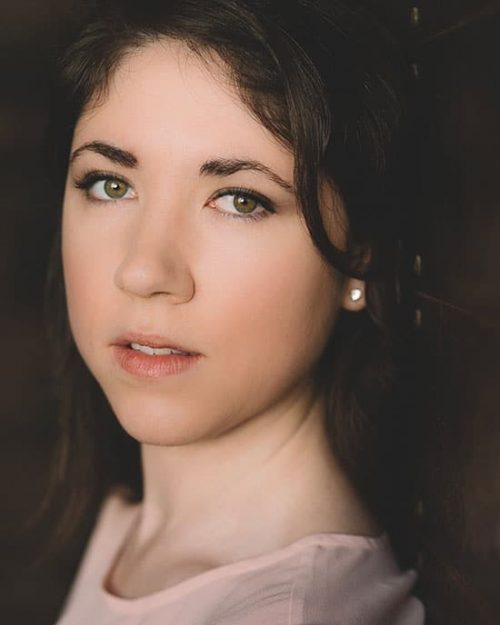 Becoming an actor has been a dream for Caroline McCaughey since she was 12 years old. She began her studies at Franciscan University as an English major, but quickly realized that theatre was her true passion.

Caroline graduated from Franciscan in 2016 with a bachelor’s in drama. In March, she finished up a job with Great Lakes Theatre in Cleveland, Ohio, on their Classics Tour, traveling to elementary schools and libraries to perform a production based on Lewis Carroll’s play, The Jabberwocky. Then she participated in the summer acting intensive at Shakespeare and Company in Lennox, Massachusetts.

When she was a senior in high school, she wanted to go to an acting conservatory; however, she is now grateful for the Catholic liberal arts education she received at Franciscan.

“Franciscan’s holistic approach to theatre is so important,” says Caroline. “You need to be a whole person before you can be an artist. I need to fully be myself before I can be an actor.”

The various classes a drama major takes at Franciscan fully prepared her to work in the drama field. At first, Caroline was only interested in acting classes, but she found the other skills she developed were just as valuable, such as how to design the sound, lighting, set, props, and costumes for a show. One of the most important skills she learned was teamwork.

“The spirit instilled in many artists is a selfish attitude. However, at Franciscan I learned to work as a team, which is essential to my job and takes a lot of creativity and strength,” says Caroline.

Caroline says the professors in the Drama Department had an impact on her.

Dr. Monica Anderson, drama professor and chair of the Fine Arts Department, helped Caroline define her own artistic values in Anderson’s Theory of Theatre class. She now finds she can hold intelligent conversations with seasoned actors.

“All that I have learned about theatre history and theory allows me to engage with these professional actors. Realizing I could hold my own in a conversation with them made me much more confident,” says Caroline.

Design for the Theatre, taught by former drama professor Shawn Dougherty, showed Caroline how to analyze plays, which is essential to her work today.

“He really prepared me for what to expect in audition rooms and how to look for auditions to find work.”

Although Caroline was initially hesitant about majoring in drama, being on stage is her true passion because she can bring beauty and truth to an audience.

“As an actor, I have the ability in my own body to be an incarnation, to bring truth to my audience just by standing on the stage. As an actor or an artist in any medium, if there is truth and love, God is there. It is so vital for artists to know the sacramentality of art. The sacraments are there to make the invisible visible. As artists, we give form to truth.”